GNI AT THE 2016 NUCLEAR INDUSTRY SUMMIT

“When the initiative came together for the first time last August, Ken called it a unique collaboration between two non-traditional partners. I agree.”

Tune to 9:40 minute mark to view 2016 Nuclear Industry Summit Chairman Marvin Fertel’s remarks on collaborations between the industry and policy communities and value of the Global Nexus Initiative (GNI) during his opening remarks at the summit in Washington, D.C. on March 30, 2016. Fertel further recognizes the leadership role that PGS President Kenneth N. Luongo has played in bringing the two communities together.

Missed the chance to visit the GNI booth during the 2016 Nuclear Industry Summit Exhibition Hall? Visit the website for more information about the project. 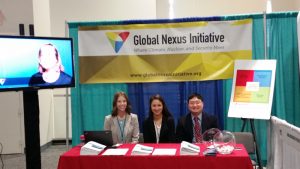